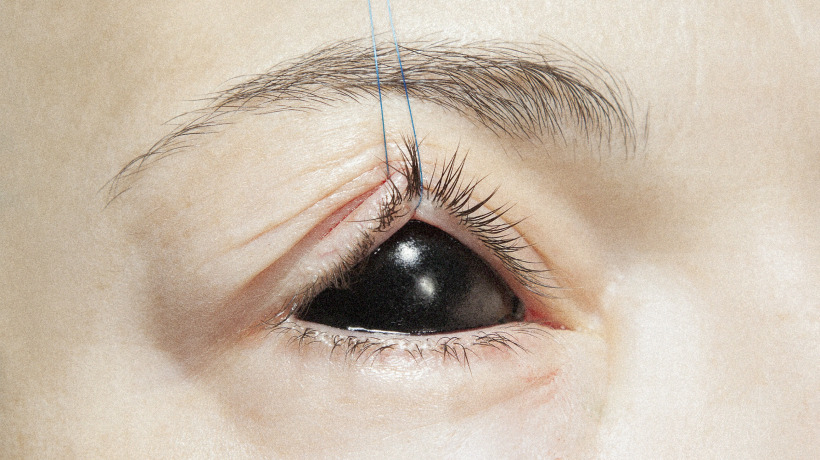 < 1 min.
The exhibition Skin unveils different photographic practices, touching the topic of skin, be it gently or roughly, from its superficial mindfulness, its microscopic structures, to its social embodiment – in the economy of the gaze, it oscillates between the desired and demanded, exposing physicality, the relations between the real and the created, between immersion and deconstruction.
Info
Bio
PDF
Close

Skin – organ, boundary, shield, medium, metaphor. This permeable surface stands as a barrier to the “outer” world, an observable texture of our public persona, and at the same time a safeguard for our perceptual inner self that mediates and constructs our environment. Carved by the space and time, the skin is a (living) tissue, shaped by the chisel of time inscribing on it the contours of an individual’s autobiography. It is carnal, intimate, personal, always aware. It belongs to the senses and at the same time it is alienated, libidinous, even uncanny – it belongs to us, others… everyone – but at the same time, to no one at all. Skin is a part of a wider social tissue, framed by the gaze of others, seemingly animated by its own spirit. It is a membrane of the world and every individual – it equally radiates and inscribes identity.

The exhibition Skin unveils different photographic practices, touching the topic of skin, be it gently or roughly, from its superficial mindfulness, its microscopic structures, to its social embodiment – in the economy of the gaze, it oscillates between the desired and demanded, exposing physicality, the relations between the real and the created, between immersion and deconstruction. As does photography.

Kristina Ferk (1992) studied History of Art and Latin Language, Literature and Culture at the Faculty of Arts in Ljubljana. In 2020, she graduated from the School of Curatorial Practices and Critical Writing World of Art. As part of this course, she participated in the installation of the exhibition control < cultivate > evolve at Škuc Gallery. In November 2020, she co-curated Under Pressure, the final exhibition of the World of Art School at Škuc Gallery; and in January 2021, at the same gallery, she curated the exhibition Tadej Vaukman: But don’t show this to my kid. As part of the DLUL Gallery’s Young Curator Young Artist programme, she curated the exhibition Maja Bojanić: draw each easily enough enough erased erased. In November 2021, she curated the exhibition Impossible to Return to an Impossible Land at Galerie Kresija, where she has worked since 2019.

Ewa Doroszenko (1983) is a Warsaw-based intermedia artist. She earned her doctorate in fine arts from the Nicolaus Copernicus University in Toruń. Her artistic practice is characterized by an unconventional use of digital manipulation, together with the classic photographic medium and traditional painting. Ewa Doroszenko is a winner of international competitions, including Fait Gallery Preview (2016), DEBUTS – doc! photo magazine (2018), Debut – Lithuanian Photographers Association (2018), scholarship holder of the Ministry of Culture and National Heritage of the Republic of Poland (2019), the City of Toruń in the field of culture (2013 and 2011), and recipient of many international residency programs. She is also a finalist of the Noorderlicht International Photo Festival (2021), Kranj Foto Fest (2021), FIF-BH – International Festival of Photography of Belo Horizonte (2020), Athens Digital Arts Festival (2020), Landskrona Foto Festival (2018), FILE Electronic Language International Festival Sao Paulo (2015), ISEA International Symposium on Electronic Art Vancouver (2015), GENERATE! Festival for Electronic Arts (2015). Her works have been shown, among others, at the Center for Contemporary Art in Torun, Vilnius Photography Gallery, MAH – Museum of Angra do Heroismo, Propaganda in Warsaw, Fait Gallery in Brno, Kasia Michalski Gallery in Warsaw, Exgirlfriend Gallery in Berlin.

Görkem Ergün (1981) is an artist and also works in a photography archive in İstanbul. In his lens-based works, Ergün focuses on the relations between culture, design and violence with a body-centered point of view. Scientific developments, new technologies, great destructions and rituals make it possible to create new meanings about the consequences of focused relationships and how these relationships can be transformed. His works have been exhibited in various galleries, museums and showcases.

Karina-Sirkku Kurz is a Finnish-German photographer and visual artist currently based in Berlin. She studied in Bremen, Lahti and Helsinki where she graduated with a master’s degree from the Department of Photography at Aalto University School of Arts, Design and Architecture. Kurz’s work UNGLEICHGEWICHT (Imbalance) has won and been nominated for several prizes. The book of the same name won the Nordic Dummy Award in 2015 and was then published by Kehrer Verlag. In 2017, UNGLEICHGEWICHT was honored with the Finnish Photobook Award, organized by the Association of Photographic Artists and The Finnish Museum of Photography. Photographer Alec Soth chose the winner. Kurz is a member of the Union of Artist Photographers in Finland and Deutsche Fotografische Akademie. She received several grants, among others, from Haus am Kleistpark in Berlin, the Finnish Cultural Foundation, The Arts Promotion Centre Finland, FRAME Contemporary Art Finland, Norwegian Arts Council and The Swedish Cultural Foundation in Finland. Kurz’s works can be found in the Finnish State Art Collection, the Collection of “The Finnish Museum of Photography” and in private collections.

Anne Lysbeth Noble (1954) is one of Aotearoa New Zealand’s most widely respected contemporary photographers who has been at the forefront of photographic practice in New Zealand since the early 1980s. Creating bodies of work that mark sustained engagement with particular places, sites, histories, issues and more recently species, her images are known for their beauty, complexity and conceptual rigour and for their persistent inquiry into the ways we perceive and come to understand the natural world. Anne Noble is Distinguished Professor of Fine Arts (Photography) at Massey University, Wellington, and the recipient of numerous awards including the 31st Higashikawa Overseas Photographer Award (2015), a Fulbright Fellowship at Columbia College, Chicago (2014), a New Zealand Arts Foundation Laureate Award (2009) and US National Science Foundation Artists and Writers Award (2008). She has exhibited widely both nationally and internationally and her work is held in collections throughout the world.

Goran Bertok (1963) studied journalism and comparative literature and graduated in 1989 in journalism from the Faculty of Sociology, Political Science and Journalism – FSPN (now Faculty of Social Sciences – FDV). In 1990, the central motif of his first solo exhibition held at the ŠKUC Gallery was the human body bearing signs of physical violence. In subsequent series, Bertok explored the transitions between all stages of violence; from make-believe violence, intentional harm done to one’s own body and/or the other’s body to the organised violence that society inflicts on the body of an individual, culminating in physical death and complete destruction of the body.

Špela Šivic (1998) is a young Slovenian photographer. While attending the Faculty of Applied Sciences – VIST in Ljubljana, she expanded her knowledge of photochemistry and various darkroom processes with photographer Peter Fettich who has been member of the Kela collective over the past year. She decided to spend her third academic year in Bari, at the Accademia di Belle Arti di Bari. She uses the analogue technique and occasionally complements her works with other means of artistic expression, thus exploring in terms of both content and form how to render the moment that occurs in front of the camera in its final form as genuinely as possible. Her first photography book, Brugnon, came out in February 2021. Last September Špela Šivic and Jaka Mojškerc held the exhibition MOMCI and some other or less related things.

Catalogue of the exhibition Skin

“To observe a river as it meanders is a bit like watching the grass grow. You can know it is happening. But you cannot see it.”